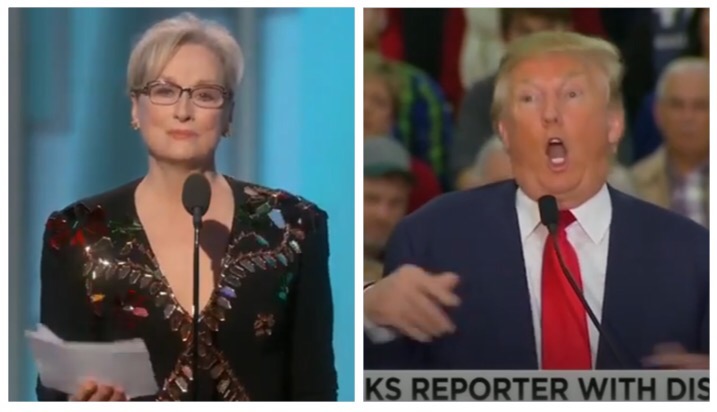 Did anyone catch Meryl Streep’s speech last night? Donald Trump certainly did! His tweeted response was typical Trump fair: attack them personally, link them to your political opponent, deny the charges, remind the audience that Trump is a winner, attack the media, etc. Well, without unpacking Streep’s whole speech, here are a few thoughts on it. ‪ 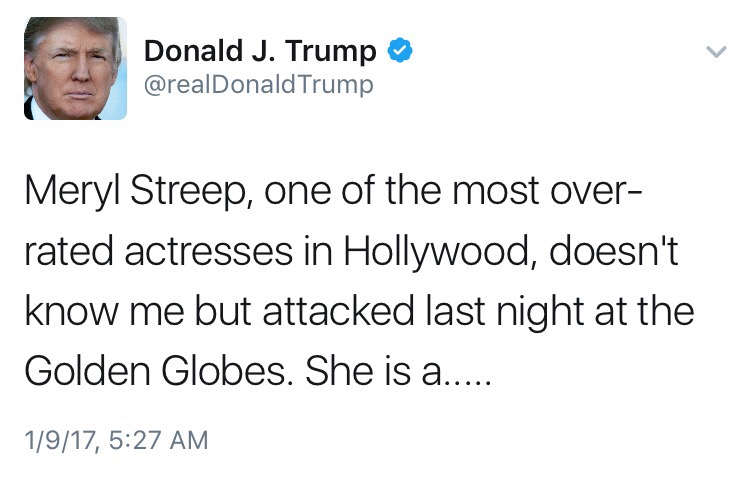 It was enevitable that the left, and its propaganda arm in Hollywood, was going to find something not to like in a Republican President. This would have been the case whether the occupant was the walking faux-pas that is Trump or the less flawed Marco Rubio. That being said, it is disingenuous, bordering on the ridiculous, for Trump to pretend that Streep had no point. Trump did poke a little fun at a certain reporter’s disability. He told his rally audience, “You gotta see this guy,” and then begin flailing his arms around in mockery of this person’s particular affliction. Hey, he can do that if he wants to; he’s breaking no law! If Trump wants to establish new heights for the avant-garde of sticking-it-to-the-establishment by bucking their stupid rules about not attacking weaker people, he can. Seems a silly crusade, but ok. However, he shouldn’t lie about it, especially when the reality is so obvious to anybody with access to YouTube. Also, the PEOTUS shouldn’t be surprised if a lot of people, even Hollywood types, find his particular form communication troubling. If Donald is a little ashamed or embarrassed by what he did, he should try apologizing. However, at least be man about it.

As for Streep’s other concerns, not everything was objectionable, at least on its face. Besides her plea for civility from those in power, she called for the need of a “principled press” to hold power to account while making an authority appeal to the Constitution. What’s to disagree with? The President does need to be accountable to the Constitution, and held to account by a watchdog press (lately playing Obama’s lapdog). Assuming I disagreed, don’t even vapid liberal actors, who are as far removed from regular people as Michael Moore is from a salad, have just as much right to use their particular platform to advocate for their beliefs as anyone else does?

There is one issue, however, regarding the Golden Globes editorial that deserves addressing: consistency. I must have missed the time that Ms. Streep showed concern for the Constitution and an independent press when Barack Obama was ruling through executive fiat and having his Justice Department conduct raids on reporters who were investigating his administrations various scandals. For some reason, that didn’t seem to bother Meryl, or at least she didn’t use her fame then to criticize the President on some of the more troubling abuses of his authority. Don’t misunderstand me. It’s nice to hear from all these born-again federalists! Welcome to the party! However, it is noteworthy that when a more favorable tyranny was being perpetrated by one from her own political persuasion, Streep saw fit to not speak out.

There are many areas that Donald Trump is and will be deserving of critique. Certainly, Streep’s performance was only one of many salvos yet to come from the S.S. Tinseltown. Yet, until Streep and her class of actors-cum-political gurus address and apologize for 8 years of turning a blind eye to the violation of the principles they now seem to have whole-heartedly embraced, they’ll have zero credibility. Their criticisms will fall on deaf ears, persuading no one that doesn’t already agree. Good thing for her, credibility or persuasion isn’t what Streep’s after, nor Martin Sheen, nor any number of celebrities that have been popping up to do insipid and homogeneous political ads. Rather, what they want is to signal to their pals, other vapid Hollywood actors, to say “Look at me! I’m a good person!” Well, to that I’d say, “Mission accomplished!” Be satisfied, because you’ll have little else. I still loved Streep in Julie & Julia, however!

New info has come to my attention that Trump wasn’t mocking the aforementioned man’s disability. Though the video on its own with Trump’s words seemed pretty clear, I have to admit that this time I got it wrong.